The sky was amazing tonight. It wasn’t just in one spot. There were things happening all over the place. There were different shapes and colors of clouds almost everywhere you looked. Straight gray clouds and their tails were floating along in the west. Some puffy, dark gray clouds were hanging out in the north. Lower in the sky some bright pink clouds were glowing. There were various shades of pink and red and orange in other spots of the sky as well. Some light blue and some darker blue was painted across other parts of the sky. There were spots where the light was shining bright and some dark spots just a little bit over.

I was thinking of trying to take some pictures, but there was so much going on, so much beauty, so many interesting things to see all over the place, I didn’t know where to begin. So I decided not to take any pictures, but just enjoy the art show God was putting on.

I’m afraid some people probably missed tonight’s art show. Maybe they were busy being productive. Or they were looking at their phone. We can get so busy doing that which we think has to be done right now, we miss out on what God is doing. We live under the tyranny of that which tries to convince us it’s urgent and necessary. Most of the time it’ll be okay if we pause for a moment, lift up our eyes and spend some time in awe and wonder at what God has done.

“The heavens declare the glory of God; the skies proclaim the work of his hands” (Psalm 19:1). Tonight the skies proclaimed God’s wondrous beauty and glorious creativity. Thank you, Lord, for painting another masterpiece. 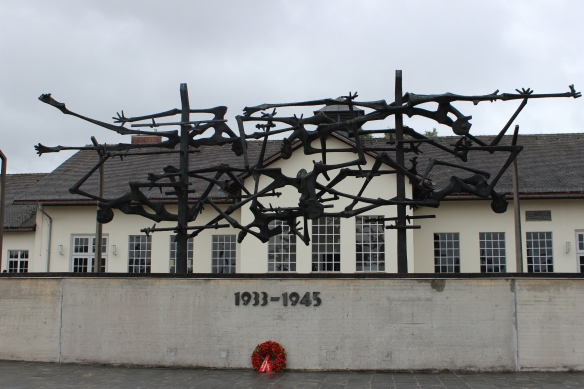 It may seem strange to think of Wii bowling when visiting the Dachau concentration camp in Germany, but that’s what happened to me last month. Dachau is one of the camps where the Nazis in the 1930s and ‘40s imprisoned, tortured and killed many. Wii bowling is a video game. Around 10 years ago I was playing Wii bowling at some friends’ house. I was watching the TV and not my hand as I made the motion of throwing a bowling ball, while using a remote. I didn’t see the little girl as she stepped in front of my hand just as my arm was going forward. My hand with the remote in it hit her right on the side of the head. She started to cry and bleed a little bit, and I felt terrible.

After some tears and a wet cloth and some kisses and hugs from her mom, she was okay and back to smiling and playing. It didn’t go quite so easy for me. The others who were there that night said Sierra would recover much quicker than I would from the incident, and they were right. I never played Wii bowling again, and I don’t expect I ever will. It’ll just bring back bad memories of me causing pain to sweet little Sierra.

When I was at Dachau I thought of how terrible it felt to cause pain to that little girl and I wondered: how in the world could those people who ran this prison inflict such horrendous pain on so many other human beings? It seems inconceivable, and yet it happened. The human heart, when it wanders far from God, is capable of all kinds of wickedness. Sadly, evil can get such a hold on a person that inflicting pain on others no longer bothers them. In some sick way they enjoy it.

I remembered Dachau when reading the tragic news of what happened in Charlottesville, Virginia. People calling themselves white supremacists and neo-Nazis marched and spewed forth hateful rhetoric. It appears one of the neo-Nazis purposefully drove a car into a crowd of people who opposed them, killing one person and injuring others. You go to Dachau, you read of what the Nazis did, and you shudder to think that anyone would want to be a neo-Nazi.

I also shudder when groups like white supremacists claim to be Christian. One of the first key issues the New Testament church had to deal with was the Jews feeling superior to the non-Jews and believing God only cared about them. The Holy Spirit did a powerful work to make it convincingly clear to the leaders of the early church that God loves every human being equally. Jesus died for the sins of the whole world. He wants each person to come to faith in Him, no matter the color of their skin or their ethnic origin. Peter declared in Acts 10:34: “I now realize how true it is that God does not show favoritism.” It is totally contrary to the message of Christ to say one race is more favored by God than others.

It is also totally contrary to the way Jesus does things to believe it is okay to use violence on those with whom you differ. Jesus wants to heal, not hurt. He wants to build up people, not tear them down. He is such a beautiful contrast to the harsh, nasty, violent spirit that seems to be so prevalent in our day. In Matthew 12 it says of Him: “He will not quarrel or cry out; no one will hear his voice in the streets. A bruised reed he will not break.” A bruised reed symbolizes a person who is hurting and struggling, bruised by the trials of life. Jesus is gentle with that kind of person. He wants to lovingly and carefully heal their wounded soul.

The world thinks, if you’re attacked, hitting them back harder than they hit you is a sign of strength. It isn’t. Treating each person with respect and as valuable, no matter who they are; choosing humble service over revenge and gentleness over violence: that’s true strength.

Some things are worth fighting for, and some things aren’t. On a recent trip to Germany our group was reminded of some men who fought battles over things that were worth fighting for. We visited sites that were significant in the life of Martin Luther. The man who led the Protestant Reformation in the 1500s battled over things that truly mattered. He caused an uproar in the church because people were not being taught the truth about how their sins could be forgiven. They were being misled about how they could be in a right relationship with God. Luther courageously charged into battle over truths that were of eternal importance.

On the trip we visited the Wartburg Castle where Luther was hid away for almost a year. While there he translated the Bible into the common German so that the common man could read it. Doing the translation was a challenge, but getting the Bible into a language people could understand was a battle worth taking on.

We visited Dietrich Bonhoeffer’s house, which is now a museum. Bonhoeffer was one of the first pastors in Germany who spoke out against Adolf Hitler and the Nazis. Bonhoeffer could have stayed in the safety of the United States or England during World War 2, but he chose to return to Germany to pastor and serve his people. Some in Germany knew Hitler was evil, but they didn’t have the courage to speak out against him. They ran from the battle. Their bodies stayed safe but their souls were full of guilt. Bonhoeffer took on the battle. He died a martyr’s death at the hands of the Nazis, but his soul was at peace, by God’s grace.

Luther and Bonhoeffer took on challenges that were worth the struggle. Sadly many get involved in battles that are pointless. Some fight a “valiant struggle” to make sure silk flowers don’t appear in the church sanctuary during a worship service. The Bible is pretty quiet about silk flowers. Some battle over carpet color or what brand of coffee to serve. Does it really matter?

“No one serving as a soldier gets involved in civilian affairs” (II Timothy 2:4). We pray for wisdom to discern what are “civilian affairs” that should not distract us. We pray we would not fall into the trap of letting minor matters became the cause of major disputes. Let us be willing to not get our way and lose out on the insignificant issues. Let us instead be the type of people President Theodore Roosevelt described: a man “… who spends himself in a worthy cause.”

Jesus knows what battles matter. People wanted Him to take on the Roman Empire. He didn’t get involved in that battle. He came to take on sin and death. That is the battle He fought and won. Because He won the battle that mattered, we don’t get too worked up about the unimportant disputes. We devote our time and energies to the big challenges: proclaiming the good news of Jesus, building up God’s church and loving people.