The University of Oregon drama department might not be a place you would expect you could go to and find strength and encouragement in your faith in the Lord. But it happened to me.

It was a little over 20 years ago when I was living in Eugene. The U of O drama department put on a production of the play “Shadowlands.” The play tells the story of the Christian writer C. S. Lewis and his relationship with the woman who became his wife, Joy Davidman. When he was 57 Lewis married Davidman. Only four years after their marriage Joy died of cancer. The play tells the story of Lewis and Davidman falling in love, her battle with cancer, and Lewis’ battle with grief after her death. It is honest about his pain and sorrow, and also tells of how God helped him in dealing with his pain.

My sister, mother and brother had died the year before I saw the play. I could relate to Lewis’ struggle with sorrow. Some of his questions about why and about God’s purposes were questions I was wrestling with also. The play didn’t attempt to give simplistic answers to difficult questions. I was encouraged by the reminder that it is okay to hurt and mourn. I was encouraged too by the story of a man who God comforted.

God comforted me as I watched the play. After the play, as I was heading to my car, I found myself crying and thanking God for giving me the encouragement I needed that night. The U of O drama department maybe was just trying to put on a good play and didn’t have the goal of strengthening the faith of someone like me. But God used them in a powerful way.

During this new year comfort and encouragement may come to you from surprising places. God may use people you’re not expecting to teach you from His Word and point you to Jesus.

Jesus came from a surprising place. When Nathanael, who became a disciple of Christ, first heard what town Jesus came from he said, “Nazareth! Can anything good come from there?” (John 1:46). He didn’t think the Messiah would come out of a place like Nazareth. God’s Holy Spirit continues to take up residence in and do significant work in surprising places. God has used people who maybe seemed kind of gruff to encourage me. He has used ones with little formal education, who never stood in front of a classroom, to teach me a lot about walking with Jesus. It’s good for us to be open to being surprised by the ways God might encourage us and the ones God might use to teach us in the new year.

The Christmas story usually isn’t thought of as a scary story. And yet in the Gospels, a phrase that is repeated over and over is: “Do not be afraid.” It was one of the first things an angel told Zechariah, Mary, Joseph and the shepherds. They got scared when all of a sudden an angel appeared. You’d probably be scared too if a big strong creature who was clearly not of this world came out of nowhere and started talking to you.

People getting scared when God comes near has been going on since Adam and Eve. After they sinned, when they heard God coming they tried to hide from Him out of fear. The sinful, fallen human race has been fearful ever since. Our guilty conscience gets scared in the presence of holiness. It is right for a person to be fearful in the presence of God if their sin has not been dealt with. It is dangerous foolishness to be unforgiven but not fearful before the holy, almighty God.

“Do not be afraid” is a good news declaration that God has come to put an end to the problem that produces all the fear. After telling Joseph to not be afraid the angel let him know the reason why. “She will give birth to a son, and you are to give him the name Jesus, because he will save his people from their sins” (Matthew 1:21). Jesus went to the cross and paid the penalty in full for all of our sins. He satisfied the demands of the law. Because of the cross, the fear of judgment hangs over our head no more. We have been set free from the fear of facing what we deserve.

Jesus has come to change our attitude toward the news that God is here. By faith in Christ, God is no longer the Judge who scares us. Instead we can now know Him as the loving Father who cares for us. When we are trusting in Jesus we are not fearful about God coming near. The good news that Jesus is Immanuel – “God with us” – brings peace. The Lord of lords loves us and is with us. We don’t face the challenges of life alone. The One who has conquered sin and death is willing to go through life with us.

The world is constantly trying to scare us and make us prisoners of fear. Many people are slaves to anxiety and worry. The world tells us to be afraid of who and what is coming. We don’t need to fear what might come because we know Who has come. The Son of God has come to set us free from the prison of fear. “Do not be afraid.” The Prince of Peace has come.

His mother taught him not to brag about himself. President George H.W. Bush took his mother’s lesson to heart. After his recent passing, friends and people who worked for him talked about his humility, his gentleness and his kindness.

After the Berlin Wall came down aides wanted Bush to go to Berlin and celebrate winning the Cold War. Some thought it would be good to go and let the Soviets know, “We beat you.” Most politicians would have relished the opportunity to declare victory and show superiority. Bush said no. He wasn’t interested in showing off and soaking up applause from crowds.

After the Gulf War victory a parade was held in New York City. Bush was encouraged to go but he said the moment belonged to the troops. He wanted them to get the applause and praise. Other times in his administration Bush used the pronoun “I” when talking about mistakes that were made. He used the pronoun “we” when talking about accomplishments. He shared praise but not blame.

During a press conference while president, Bush called the reporter Susan Page “Ann.” His mistake was pointed out to him later and the next day Page received a handwritten note from the president, apologizing for calling her by the wrong name and asking for her forgiveness. What a contrast from politicians who call reporters names like “stupid” and “loser” and other names that are not fit to repeat.

Bush may have occasionally forgotten a reporter’s name or called them by the wrong name, but people who worked at the White House told about how he took the time and made the effort to learn the names of the people who worked there, including the cleaning staff and those providing security. No matter their job, they were people of significance who have a name.

We often don’t look for humility when it comes to choosing leaders, but we should. The truly great leaders in history – Abraham Lincoln for example – showed remarkable humility that had been learned through trials and failures. Lincoln’s humility was demonstrated by his ability to laugh at himself. Bush did that as well. Dana Carvey got a lot of laughs on Saturday Night Live for his impressions of Bush. Instead of attacking him, President Bush invited Carvey to the White House and they became friends. 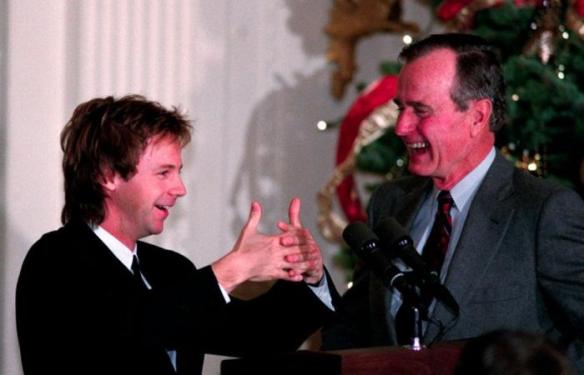 Humility is a fundamental Christian virtue. If God has done a work in a life, than some growth in humility should be evident. “Who is wise and understanding among you? Let him show it by his good life, by deeds done in the humility that comes from wisdom. … God opposes the proud but gives grace to the humble. … Humble yourselves before the Lord, and he will lift you up” (James 3:13, 4:6, 10).