We visited a 29-year-old man in his apartment that also serves as the meeting place of a congregation he is serving. His mother lives there as well and his sister lives nearby. The mother is also involved in trying to share the good news of Jesus with their community here in Mongolia. She recently finished two years of training at the Lutheran church’s Bible school. They have a small apartment but a big heart for Jesus and their community.  They shared about some of the different ways they’re involved in trying to develop relationships and reach people, including things like a book club and playing basketball.

The day after we met with him, the young church leader was going to ride a bus for 13 hours to another community in Mongolia that doesn’t have any church. He and the church body are looking to see if relationships can be developed that can lead to the good news of Jesus being shared in that community and eventually a new congregation begun there. The young man makes that 13-hours-one-way bus ride once a month. Pray for him and these two Mongolian communities he enthusiastically and joyfully serves. 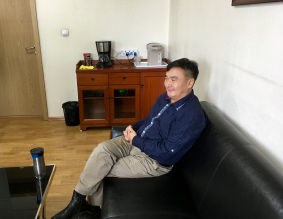 One man was a “good atheist” during his teenage years, as he grew up under the Communist indoctrination that dominated Mongolia for 70 years. He hadn’t heard anything about the good news of Jesus until he was 20 years old. The other man struggled with alcohol problems that threatened to ruin his life and his relations with his family. He saw 32 of his “drinking buddies” die of alcohol-related causes over the years. Now both of these men rejoice in having found new life in Jesus and they serve as pastors in the Lutheran church in Mongolia.

The former atheist is now convinced of the truth of God’s Word and he is teaching it, pastoring and giving leadership to the church body. The former slave to alcohol is now helping others to find the freedom Jesus brought to his life. He pastors four congregations and leads a ministry to help those struggling with alcohol problems. Both of them are great testimonies of how God can change lives. It was an enjoyable privilege to visit with them as my trip to Mongolia with Pastor Lyndon Korhonen has begun.

I recently had the chance to see the musical Les Miserables. The music is excellent but the message of the play is even better.

As the play begins we’re introduced to Jean Valjean. He did 19 years of hard labor in prison, simply because he stole a loaf of bread to help feed his starving family. He gets out but he has to carry around a piece of paper that identifies him as a convict. No one will hire him. A priest takes him in and gives him dinner and a place to stay for a night. During the night Valjean steals silver from the priest and tries to run but is quickly caught. The police bring Valjean back to the priest, refusing to believe Valjean’s claim that the silver was given to him. The priest says he did give him the silver but he forgot the candlesticks. After the police release Valjean and go on their way, the priest tells Valjean he has claimed his soul for God and he is now to live as a changed man. And that is what happens. The rest of the play is about Valjean living a new life of service to others, all because of the kindness and grace he was shown by the priest.

Who gives expensive candlesticks to somebody who eats their food and steals from them? Even more so, who gives their Son to die for rebellious, undeserving sinners like us? It doesn’t make sense, but that’s the nature of grace. It’s crazy. It gives gifts to thieves. It suffers and dies for ungrateful sinners.

While in prison Valjean suffers under the cruel hand of Inspector Javert. Javert continues to pursue Valjean after his release, and tries to throw him back into prison. In one confrontation Valjean pleads for mercy, telling Javert of people he is helping and how he has changed. Javert dismisses the idea and tells Valjean, “Men like you can never change.”

Late in the play Valjean has the chance to get revenge on Javert and kill him, but he doesn’t and he lets him go. Javert is furious and can’t understand it. “Who is this man? What sort of devil is he, to have caught me in a trap and choose to let me go free? … I’ll spit his pity right back in his face. There is nothing on earth that we share. It is either Valjean or Javert!”

It is either Valjean or Javert. It is either grace or law. Many view life like Javert. They think life is all about keeping rules. Grace angers them like it did Javert. It doesn’t seem right for criminals to receive forgiveness. Good things should only come to those who keep the rules. Punishment comes when you break them. There is no mercy or possibility of people changing.

Thankfully, because of Jesus, we can live like Valjean rather than Javert. Change is possible. God is merciful and forgiving. He longs to give His gracious gift of salvation to undeserving sinners like us. We rejoice in “the incomparable riches of his grace, expressed in his kindness to us in Christ Jesus” (Ephesians 2:7). We give thanks for the amazing, crazy, doesn’t-make-any-sense grace of God.

Fantine is a lady in Les Miserables who is treated terribly and suffers much painful humiliation. She finally gets some help from Valjean. She looks at the misery of her life and with sorrow sings, “There was a time when men were kind. When their voices were soft and their words inviting. … I dreamed a dream in times gone by; when hope was high and life worth living. I dreamed that love would never die. I dreamed that God would be forgiving.”

The good news of Jesus proclaims that those dreams come true, because of God’s grace. Jesus is kind and gentle and His words are inviting. His love for us never dies. Because of Jesus and the cross, God is forgiving. His grace is not a dream. It’s real.

The song in Les Miserables that moves me the most is “On My Own” sung by the young lady Eponine. She loves a young man who loves somebody else. From the despair of her heart she cries out: “On my own, pretending he’s beside me. … I know it’s only in my mind, that I’m talking to myself and not to him. … I love him, but when the night is over, he is gone. … Without me, his world will go on turning; a world that’s full of happiness that I have never known. … I love him, but only on my own.”

Many struggle with that kind of sadness. What helps the most is the good news that God really does love you. You don’t have to pretend He is with you. Prayer is not pretending you’re talking to Him. He is real, He hears us and He won’t be gone when the night is over. “Give thanks to the Lord, for he is good. His love endures forever” (Psalm 136:1). When we know His grace and love, we’re never on our own.